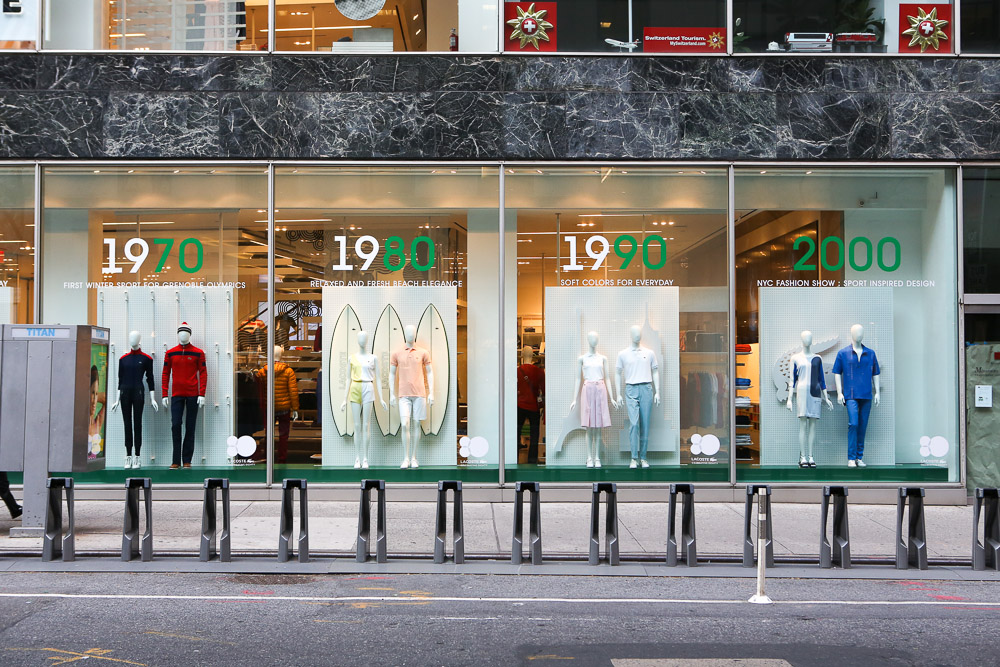 Continuing the year-long celebration of its 80th Anniversary, LACOSTE unveils a unique consumer experience in its 5th Ave flagship windows that showcases the French brand’s authentic sporting roots as well as its timeless style and constant innovation. The installation in New York runs 3-30 September 2013, linking two key cultural events in the city: the US Open where LACOSTE ambassadors sport crocodile chic on and off the courts and New York Fashion Week, where the brand hosts its seasonal runway collections to an exclusive global audience of media, buyers, celebrities and industry influencers. 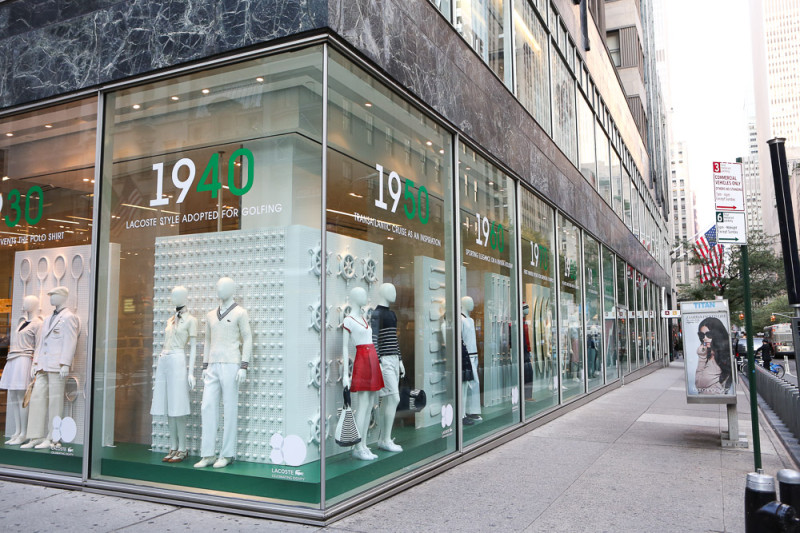 LACOSTE THROUGH THE DECADES
Wrapping around the windows from the entrance on 5th Ave to 49th Street is a series of eight snapshots that capture the spirit of each decade of LACOSTE’s rich heritage and history. Iconic pieces from the archives set against a backdrop of sports equipment and cultural objects that recall the life and times of each era.

“We pulled photographs from our Lacoste archives for each decade to reference how Lacoste styled sportswear during that time period.”

1930 TENNIS CHAMPION INVENTS THE POLO SHIRT starts with tennis of course, the roots of the brand founded by legendary winner of Wimbledon, Davis Cup and the French Open René Lacoste, who invented the polo shirt and the now-ubiquitous light and airy petit-piqué fabric to improve his performance and in the process revolutionized sportswear.

1940 LACOSTE STYLE ADOPTED BY THE GOLF WORLD sees LACOSTE style adapted and adopted from court to the courses and greens of golf, where Lacoste’s wife Simone and their daughter Catherine were both storied champions in their own right and day.

1950 TRANSATLANTIC CRUISES INSPIRE SAILING LIFESTYLE takes us on a Transatlantic sailing voyage, the pre-jetset form of luxury travel between Europe and the USA enjoyed by Lacoste and his family on their way to and from tournaments. 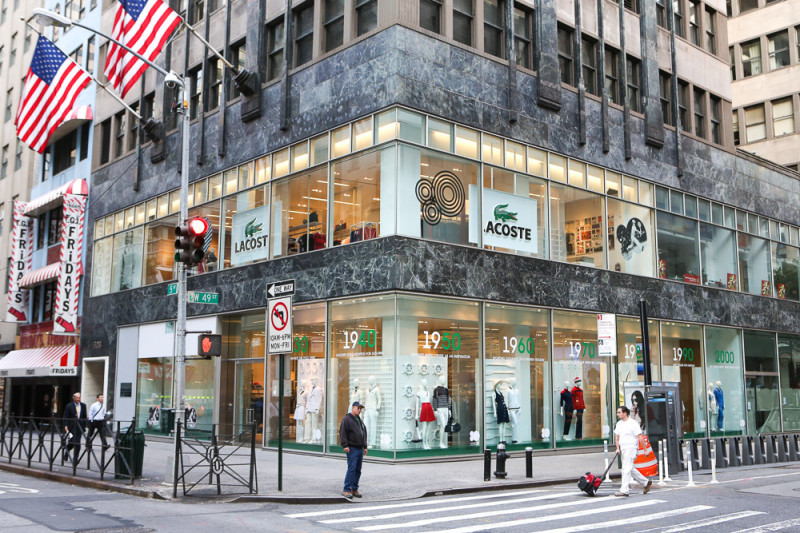 1960 SPORT-CHIC HOLIDAYS ON THE FRENCH RIVIERA recalls the sporting elegance of summer holidays on the Riviera where LACOSTE first became de rigueur for the chic crowd.

1970 FIRST SKI COLLECTION FOR THE GRENOBLE WINTER OLYMPICS introduces the first winter sports outing for the brand with a stylish spin on skiwear launched for the Grenoble Olympics.

1980 RELAXED ELEGANCE FOR THE BEACH rides a wave of surfing with relaxed, elegant and fresh beachwear.

1990 SOFT COLORS FOR EVERYDAY AND EVERYONE leads us to Urban Spring, where soft colors and active lifestyles became core wardrobe concepts.

2000 SPORT-INSPIRED DESIGN FOR FIRST NEW YORK FASHION SHOW brings us to Urban City, an intersection of sport- inspired design and contemporary style that began with the first New York Fashion Week runway show from the brand. 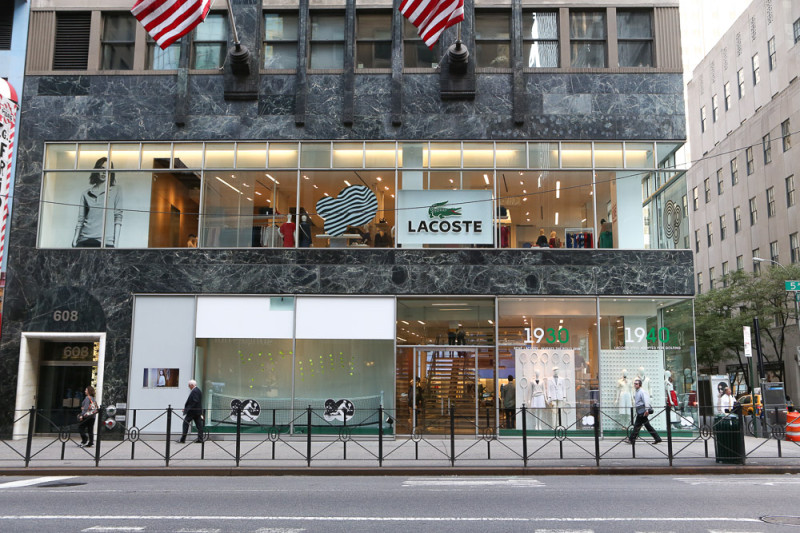 INTERACTIVE TENNIS BALL DISPLAY
Flanking the left of the 5th Ave flagship entrance is an entertaining interactive installation, created by M Crown Productions, that catches the attention of passersby. Using an infra-red sensor to detect viewers left and right movements, a series of tennis balls suspended over a tennis net mimic the actions of anyone standing in front of the window, moving up and down in a wave- like motion. The whack of racquets, thuds of balls and cheers from the crowd offer a sidewalk soundtrack to complete the experience. 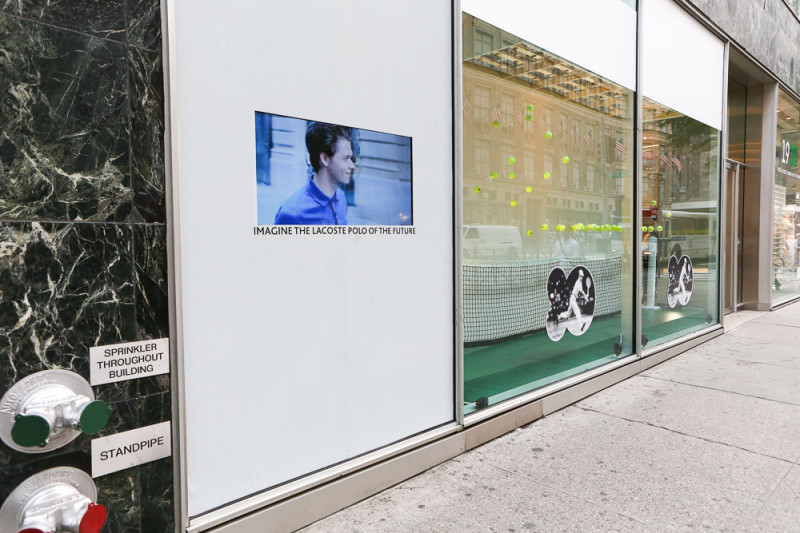 WATCH THE VIDEO OF THE INTERACTIVE TENNIS BALL DISPLAY:

POLO OF THE FUTURE
The final window at the 5th Ave flagship is devoted to the POLO OF THE FUTURE film clip, which showcases a graphic spin on the classic polo when and where technology has no limits. The film, created by MNSTR Agency, showcases the future of the polo shirt in a timeless Paris where the public can follow an eclectic cast of characters that interact with a new generation of clothing. The polo travelled through time and remained as René Lacoste had imagined it 80 years before: timeless, comfortable and stylish. But its powers are enhanced by extreme technology. Its fibers are now intelligent, its surface is dynamic and tactile, its sleeves lengthen and shorten at the whim of its owner. The dye of the polo reacts to the environment, glows in the dark, absorbs ambient atmospheres. And its colors are endless. The POLO OF THE FUTURE reinforces the timeless nature of both the polo and the LACOSTE brand. 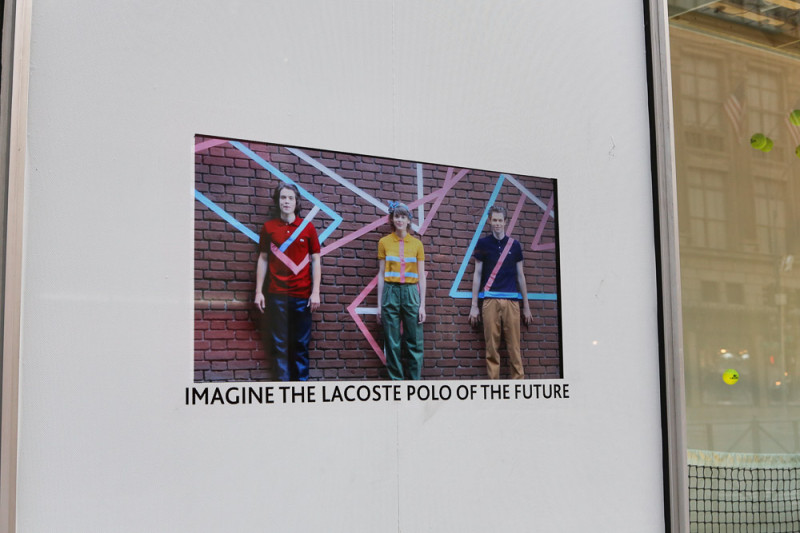 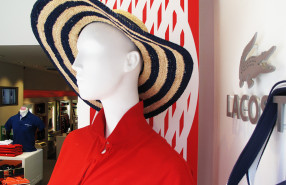